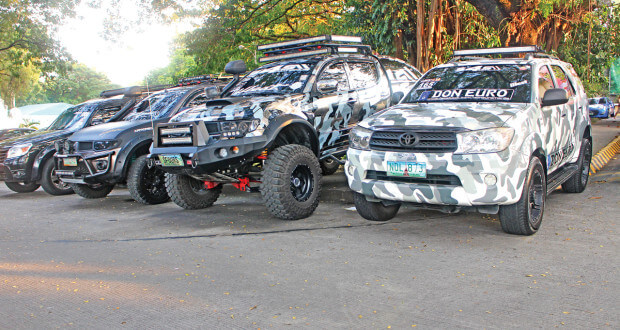 The Roads from SM City North EDSA leading to the North Luzon Expressway (NLEX) up to the Fontana Leisure Parks in Clark Fields, Angeles, Pampanga were chockfull of custom cars, muscle machines and factory automobiles as the fourth JSK Auto Fun Run went underway last November 22, 2014. More than 300 cars jammed the SM parking lot as early as 8:00 in the morning to participate in this annual fun drive organized by JSK Custom Paint and Auto Works.

Led by JSK proprietor Johnson Tan, the annual drive started in 2011 as a group fun run among car enthusiasts and friends of “Uncle” Johnson. The first fun run saw 70 participants driving cars of various makes and models from Valenzuela City to Subic. Their numbers more than doubled in 2012 to 180 cars and by 2013, the number of participants grew to more than 300 cars despite the increment weather.

Sponsored by San Miguel Corporation and the Fontana Leisure Park, this year’s JSK Auto Fun Run IV attracted almost 500 cars that participated in a long convoy from the SM mall to the Fontana Leisure Parks in Clark. On the toll ways, the convoy was ably assisted by men and women of the NLEX traffic management group. The drive through the toll ways was quick and uneventful and all the participants arrived safe and sound at Pampanga.

Upon arrival at Fontana, the participants were treated to lunch courtesy of Fontana while live bands, entertainment, raffles and games were held with lots of prizes won. There were hamburger, hotdog, and ice cream eating contests, beautiful models, and prizes galore. It was a great day to have fun and spend time with like-minded car enthusiasts.

The JSK Auto Fun Run series, which advocates unity among private car owners, driving safety and discipline on the toll ways, hopes to put the Philippines in the world motoring scene by getting into the Guinness Book of World Records for the most number of cars in a convoy by 2015 or 2016. The number to beat as of the moment is 1,090 cars, which was done in the United States.

“I’d like to invite everyone next year to come again and bring your friends so we can beat the current Guinness record of the most number of cars in a convoy”, said Tan. “I hope to see you all in the fifth JSK Auto Fun Run which will be bigger that ever!”

Words and photos by Lester Dizon